The software is no longer provided for security reasons.

The successful e-learning system EDU Workspace (EWS II) has been updated for the summer term 2006. Although the new system is a complete redevelopment, one of the goals of the redesign is to give present EWS-users access to the well known work routine, at the same time introducing a new system architecture, which can satisfy more complex needs.

EWS II makes it possible to look up all users which have signed up to every workspace - simply by one mouse click. This new feature is supposed to help the members communicate between each other - via chat, news or email. Through this the workspaces should become more lively and by that more interesting. This feature can be switched off, if the workspace director doesn´t favour it.

Improved integration into the university infrastructure

The connection to the university infrastructure, using HIS as an information system is specified.

Embedding of chat with whiteboards

For synchronic communication EWS has always placed emphasis on chat. New to EWS II is that now - parallel to the chat session - all users are able to use a collective whiteboard. On this whiteboard every user can create graphics with a simple editor which can be viewed simultaneous by all users. 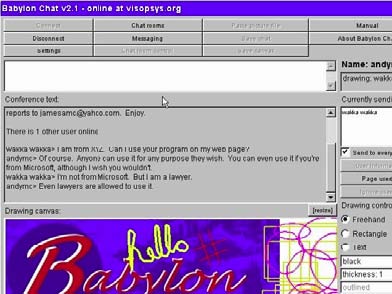 Other new tools for an asynchronous communication are now also usable in EWS II. The former news area has been transformed into a combined communication centre consisting of Wiki, WebLog and News. Concretely the SnipSnap project of the Fraunhofer Institute FIRST has been integrated into EWS II.

Wikis also known as WikiWikis and WikiWebsare collections of papers available on the World Wide Web, which cannot only be read by users, but also edited online. 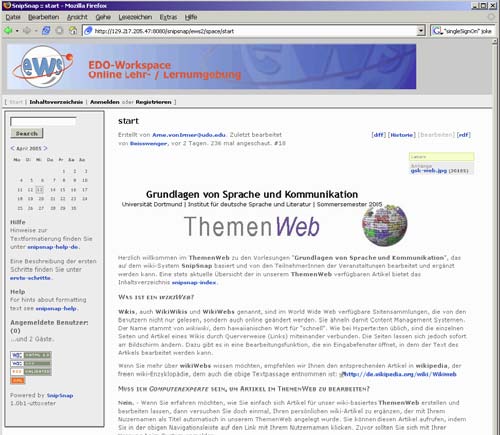 Complete redevelopment on the basis of J2EE

EWS II has been redeveloped completely. Thereby a modular structure was implemented. This concept offers standardised interfaces that are able to embed user specific extensions and thereby minimise test efforts. 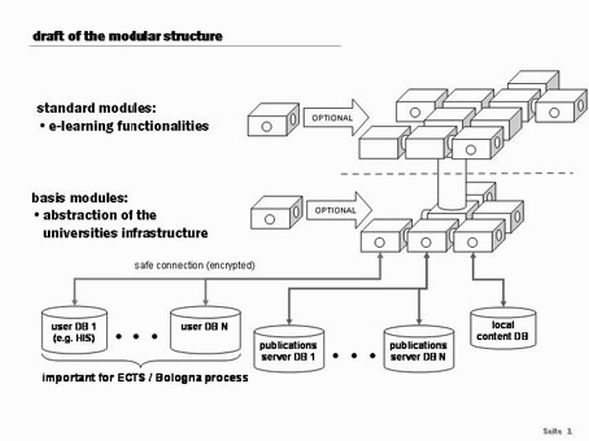 WebDAV stands for Web Distributed Authoring and Versioning (www.webdav.org). In this context "Authoring" stands for the process of editing, updating and administering content on a web server. WebDAV is a standard developed by Microsoft, Novel, Netscape and UC Irvine. WebDAV is directly supported by numerous authoring tools (i.e. Dreamweaver, OpenOffice, MS Office, etc.) Particularly functions such as versioning and locking documents support collaborative authoring. Access to the files can be obtained both through the web browser as through a file manager. HTML pages are of course shown in the browser. 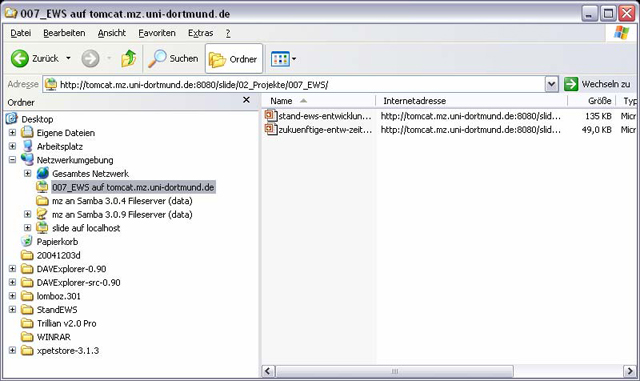 The web interface in EWS II is completely built in CSS technology and thus is designed so that blind and partially sighted people are able to read it.

EWS II is developed in cooperation with Campus Source. Concretely EWS II cooperates with the University of Hagen, the University of Duisburg-Essen and the University of Münster. An interoperability of the systems is thereby aimed for. Large parts of EWS II are used again in the CampusSource Engine (CSE), which mark the core of the combined efforts.

To Top of Page